The Movement
You are here: Home1 / The Movement2 / Audible Release3 / Differences in force-time parameters and electromyographic characteristics...

The goal of this study 1 was to compare the force-time parameters (magnitude of a force, preload force and duration of thrusts) and electromyographic characteristics (reflex or response) between two spinal manipulations delivered following one another in quick succession if the first thrust was not associated with audible cavitation.

Spinal manipulation is an effective therapy for neck and back pain and has produced an increased range of motion and a decrease in pain. But the reason for these beneficial outcomes is not well understood. Existing research suggests a relationship between spinal manipulation (thrusts) and electromyographic responses (reflexes). However, most of these studies have looked at single thrust to a thoracic vertebra using a robot or thrusts to multiple levels of the spine. Moreover, the success of a high velocity, low amplitude (HVLA) manipulation is often thought to be successful when there is cavitation (a cracking, clicking or popping sound), even though there is conflicting evidence to support this assertion.

In response to this conflicting evidence, the researchers hypothesized that there would be differences in the force-time parameters and electromyographic responses between the two thrusts. There would also be differences between people with and without symptoms.

Each participant received six diversified-style, manual HVLA spinal manipulations to the cervical and upper thoracic spines in a set order by a trained chiropractor. Electromyographic recordings were measured using surface electrodes with placement carefully matched for each participant.

Overall, the research results supported the original hypothesis that differences in treatment force influence electromyographic responses and electromechanical delays. Further, supporting the existing literature, the researchers found that cavitation from HVLA spinal manipulation does not cause reflex responses. 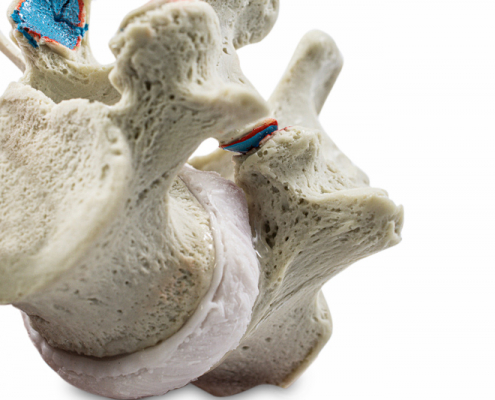 The authors note there are a few limitations that must be addressed. First, they suggest that it is difficult to know whether the second thrust’s response elicited is independent of the first thrust. Next, they suggest that it is possible the responses could be inconsistent due to electrode placement or physical differences between the participants. Finally, there could be limitations related to the study’s design. Specifically, the pressure pad is used to record the force-time parameters.

These findings provide some clarity of the mechanisms underlying spinal manipulation therapy as a treatment for neck pain. While further study is required, this information can be used for healthcare professionals to adjust treatment approaches.

Does facet joint morphology affect the development of spondylolysis?